News from the world

As roadblocks don't seem to be newsworthy anymore, climate activists have topped up their game. From pouring tomato soup and mashed potatoes on famous paintings, to spray painting the famous department store, Harrods, more and more activist groups are taking unusual action to highlight their cause. 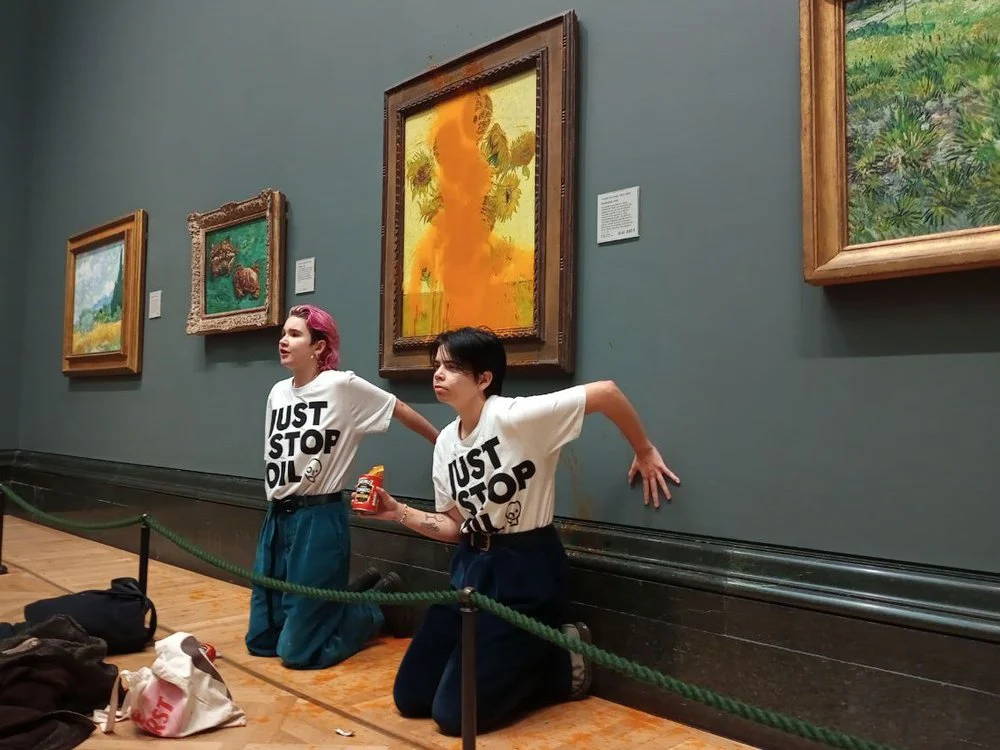 It started in the UK´s National Gallery, where protesters from the Just Stop Oil movement spilled what appeared to be tomato soup over Van Gogh´s iconic Sunflowers painting, and glued their hands to the wall. Nine days later on October 23, activists affiliated with the group Letzte Generation (Last Generation) threw mashed potatoes over Grainstacks by Monet in Potsdam, Germany, also sticking their hands to the wall. The next target was Vermeer's Girl With a Pearl Earring in The Hague, where a person glued his head to the painting and another glued his hand to the wall.

Other than targeting museums, activists also appeared by Harrods. Just Stop Oil shared on their Twitter how two people painted the window of the department store orange, while approximately 20 protesters gathered around the location, some gluing themselves to the road. In all cases, protestors have been arrested by the police. 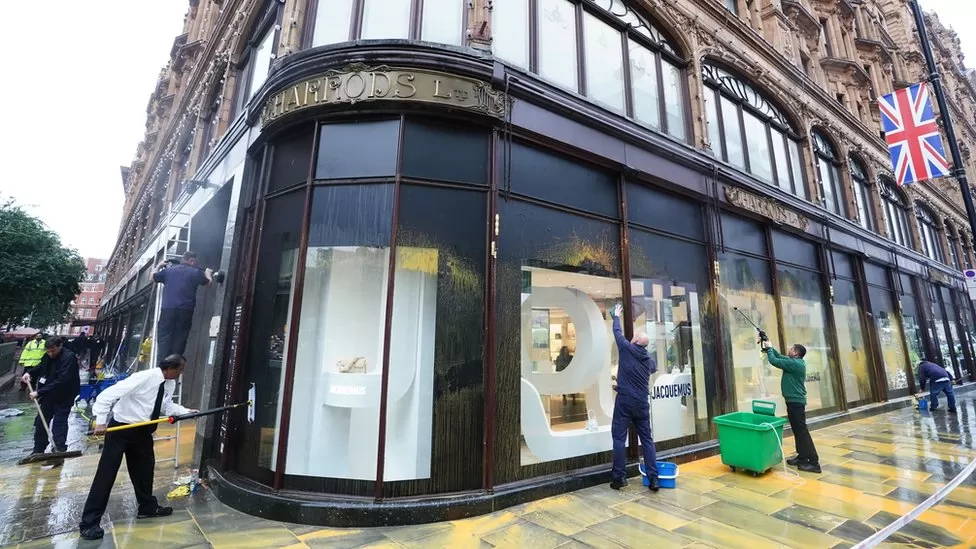 Picture from BBC UK (PA Media): "Harrods described it as a minor protest"

Why did they do it?

Many were upset after hearing the news about these actions - but that was the point? It was definitely not to create damage. As all these paintings were behind protective glass, they are reportedly unharmed. Rather, the goal was to, on one hand, gain attention, as well as to get their message across. One of the activists in Germany pointed out “We are in a climate catastrophe, and all you are afraid of is tomato soup or mashed potatoes on a painting.” Another one said: “What is worth more, art or life? Are you more concerned about the protection of a painting or the protection of our planet?”They are basically asking us: why are we upset about a painting being damaged, and not about our environment dying?

The protests were part of an effort to highlight the climate crisis, but they are also triggered by the current energy crisis in Europe. As Phoebe Plummer, one of the protesters in the National Gallery expressed, “The cost of living crisis is part of the cost of the oil crisis”.The tin of tomato soup was a tool to illustrate a bigger issue: “Fuel is unaffordable to millions of cold, hungry families. They can’t even afford to heat a tin of soup” said the activist. 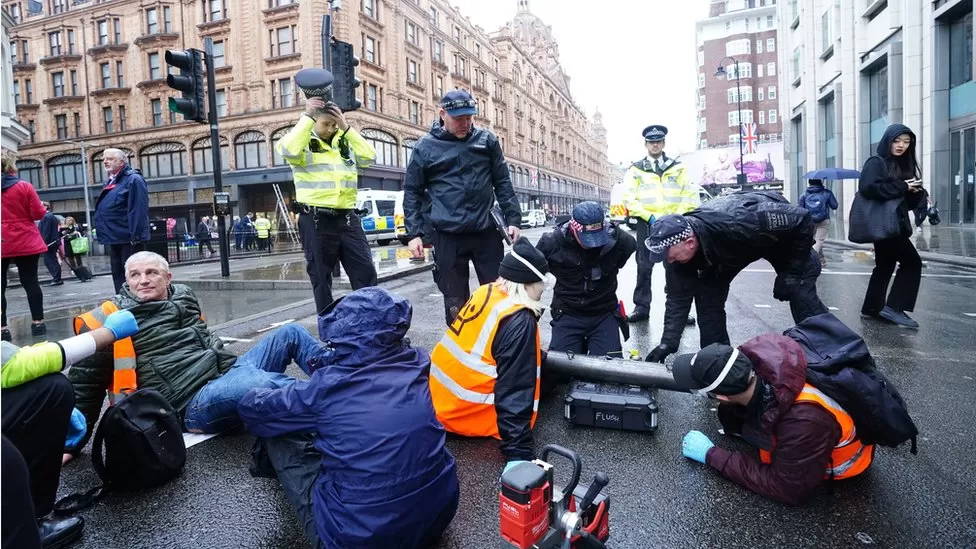 So, were these art stunts successful?

In gaining attention, definitely. Their actions resulted in numerous discussions across media channels, many turning to these platforms to voice their opinions. While some expressed their support, climate activists also received many negative comments. One of the main criticisms regarding these cases was that they found a lack of logic behind attacking cultural organizations and heritage. As the critics argued, while it makes sense to stand up against oil companies or political decisions, it seems as if in this case the activists have missed the target. 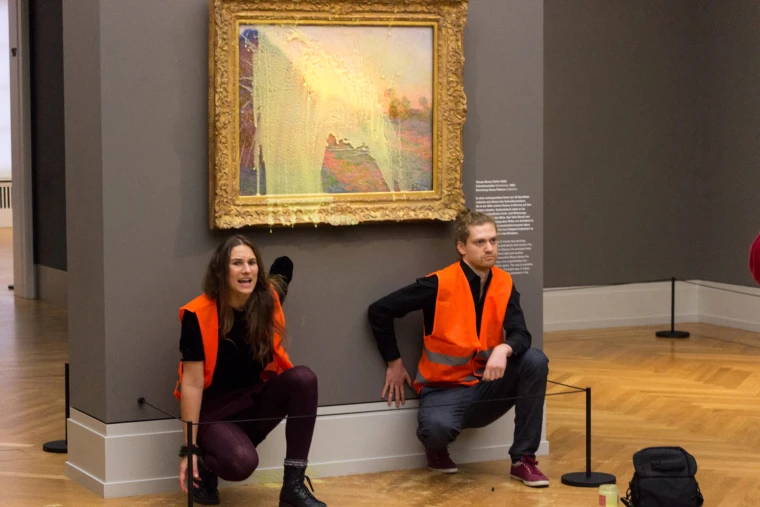 Picture from NBC (Last Generation/AFP - Getty Images): "Climate activists kneel below a Monet painting after throwing mashed potatoes on it

As Jonathan Foley, the executive director of the nonprofit Project Drawdown told The Atlantic: “Regardless of whether you think protests like this are effective or not—and as a climate scientist, I’ve spent 30 years on this issue, so my sympathies are with the protesters, of course—I find it weird to target museums and nonprofits that help all of us”. As they pointed out, while the paintings were protected by glass, these panels are mainly effective against ultraviolet light and dust, not tomato soup. Such stunts unfortunately can also lead to other difficulties for museums. Insurance companies will likely increase their prices, resulting in rising expenses for the museums on insurance and security measures. We may also see paintings be put behind boxlike cases- like the Mona Lisa- for bigger protection. Overall, these actions are hurting these organizations and so the public itself. Foley added, “I don’t understand, in the name of preserving something we cherish, damaging something we also cherish.”

On the other hand, if we follow the logic of “any publicity is good publicity”, the protests can be deemed successful. Since many news outlets are now focusing their coverage on the cost of living and energy crisis, climate activists needed what Dana R. Fisher calls “tactical innovation”. As the Sociologist at University of Maryland explained, this happens when movements create new strategies to gain public attention. Even though targeting paintings that many cherish sparked criticism, it also made the media and the public curious. As the activists themselves expressed, their goal was not to “make friends” but to get an important message across. Plummer, who appeared at court for the incident, said “I agree; it is ridiculous. But we’re not asking the question if everyone should be throwing soup on paintings. What we’re doing is getting the conversation going so we can ask the questions that matter.”

They got the coverage, but what about public support?

Despite successfully gaining media coverage, some are concerned that such actions may be counter-productive. It does spark debate, yes, but not about climate change. Instead, the conversation took a turn and focused on whether civil disobedience has gone too far this time. In this light one must worry whether this anger is overshadowing the fight for the climate, and whether it is too radical for the general public.

According to Fisher's research in this area, such actions do not appear to have a bad effect on the support of the cause. As the CBC writes, “There's very little evidence that people who watch this kind of tactic are no longer going to support somebody who's running for office who wants to address climate change”. This suggests that while people might stop supporting certain organizations, they will likely not become less supportive of climate activism in general.

Whether we agree with these actions or not, and whether these will have a good or bad effect on the movement, climate activism doesn't seem to be slowing down. What we should remember from these cases are the key messages. After all, preserving our environment is just as important as preserving our cultural heritage.