Jane Goodall: redifining what it means to be humans

people that inspire us

Ethologist and conservationist Jane Goodall redefined what it means to be human and set the standard for how behavioral studies are conducted through her work with wild chimpanzees in Gombe Stream National Park, Tanzania. 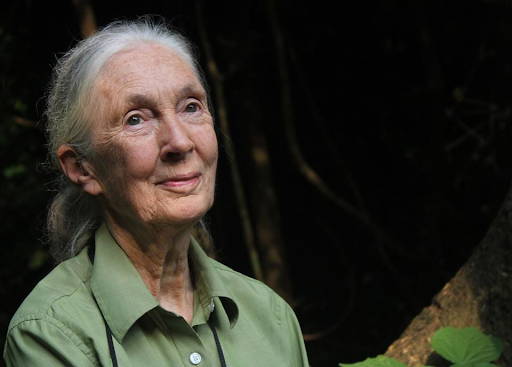 Picture by The New York Times

Who is Jane Goodall?

Dr. Valerie Jane Morris-Goodall, best known simply as Jane Goodall, was born in Bournemouth, England, on April 3, 1934, to Margaret (Vanne) Myfanwe Joseph and Mortimer (Mort) Herbert Morris-Goodall. As a child, she had a natural love for the outdoors and animals. She had a much-loved dog, Rusty, a pony, and a tortoise, to name a few of their family pets. When Jane was about eight she read the Tarzan and Dr. Dolittle series and, in love with Africa, dreamed of traveling to work with the animals featured in her favorite books. Jane was unable to afford college after graduation and instead elected to attend secretarial school in South Kensington, where she perfected her typing, shorthand, and bookkeeping skills. She retained her dream of going to Africa to live among and learn from wild animals, and so she took on a few jobs including waitressing and working for a documentary film company, saving every penny she earned for her goal. 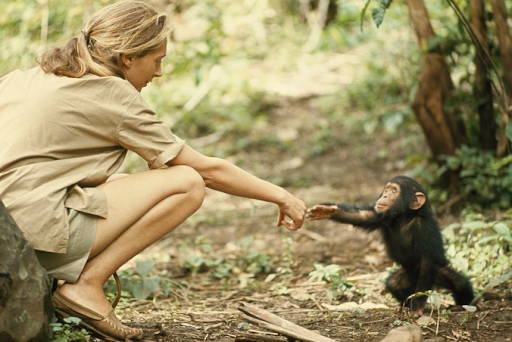 The urgent dream to protect chimpanzees from extinction

In July 1960, at the age of 26, Jane Goodall traveled from England to what is now Tanzania and ventured into the little-known world of wild chimpanzees. Equipped with little more than a notebook, binoculars, and her fascination with wildlife, Jane Goodall braved a realm of unknowns to give the world a remarkable window into humankind’s closest living relatives. Through nearly 60 years of groundbreaking work, Dr. Jane Goodall has not only shown us the urgent need to protect chimpanzees from extinction; she has also redefined species conservation to include the needs of local people and the environment. Today, at 88 years old, she travels the world, speaking about the threats facing chimpanzees and environmental crises, urging each of us to take action on behalf of all living things and the planet we share.

To prepare for her upcoming expedition Jane moved to London to work in the film library of Granada Television’s film library at the London Zoo where she spent her spare time studying the behavior of primates. In May 1960, Jane learned that Leakey had obtained funding from the Wilkie Brothers Foundation. Permits in hand, she boarded a plane to Africa. On July 14, 1960, Jane arrived by boat at the Gombe Stream Game Reserve on the eastern shore of Lake Tanganyika with her mother−local officials would not allow Jane to stay at Gombe without an escort−and a cook, Dominic.

When Jane Goodall entered the forest of Gombe, the world knew very little about chimpanzees, and even less about their unique genetic kinship to humans. She took an unorthodox approach in her field research, immersing herself in their habitat and their lives to experience their complex society as a neighbor rather than a distant observer and coming to understand them not only as a species, but also as individuals with emotions and long-term bonds. 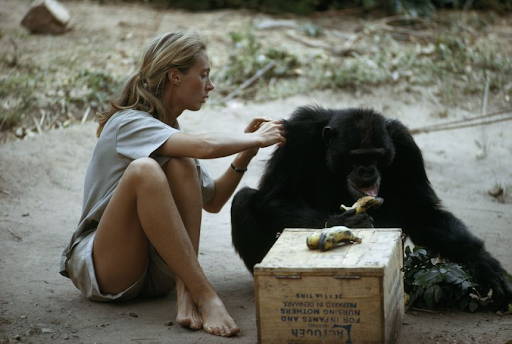 An older chimpanzee−whom Jane named David Greybeard, although the practice of naming one’s study subjects was taboo in ethology−began to allow Jane to watch him. As a high ranking male of the chimpanzee community, his acceptance meant other group members also allowed Jane to observe. It was David Greybeard whom Jane first witnessed using tools. She spotted the chimpanzee sticking blades of stiff grass into termite holes to extract termites. Excited, she telegraphed Dr. Leakey about her groundbreaking observation. He wrote back, “Now we must redefine ‘tool,’ redefine ‘man,’ or accept chimpanzees as humans.” Dr. Jane Goodall’s discovery in 1960 that chimpanzees make and use tools is considered one of the greatest achievements of twentieth-century scholarship.

Redefining the relationship between humans and animals

During the years she studied at Gombe Stream National Park, she made three observations that challenged conventional scientific ideas: (1) chimps are omnivores, not herbivores and even hunt for meat; (2) chimps use tools; and (3) chimps make their tools (a trait previously used to define humans). Beyond the significance of her discoveries, Jane's high standard for methods and ethics in behavioral studies may have had the greatest impact in the scientific community. Her field research at Gombe transformed our understanding of chimpanzees and redefined the relationship between humans and animals in ways that continue to emanate around the world. Jane continued to work in the field and, with Leakey’s help, began her doctoral program without an undergraduate degree in 1962. At Cambridge University, she found herself at odds with senior scientists over the methods she used−how she had named the chimpanzees rather than using the more common numbering system, and for suggesting that the chimps have emotions and personalities. She further upset those in power at the university when she wrote her first book, ‘My Friends, the Wild Chimpanzees,’ published by National Geographic, aimed at the general public rather than an academic audience. The book was wildly popular, and her academic peers were outraged. Dr. Jane Goodall earned her Ph.D. on February 9, 1966, and continued to work at Gombe for the next twenty years. 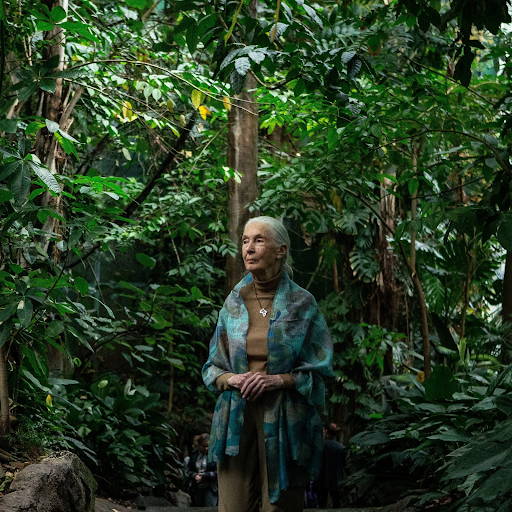 Picture by The New York Times

The path towards activism

On the path to becoming the world’s leading primatologist, Dr. Jane Goodall redefined traditional conservation and shifted from scientist to conservationist and activist. In 1977, she founded the Jane Goodall Institute to support the research in Gombe and scale up the protection of chimpanzees in their habitats. In the late 1980s, it became clear that Gombe was only part of the solution to a much bigger, rapidly growing problem of deforestation and declining chimpanzee populations across Africa. Knowing that local communities are key to protecting chimpanzees, she redefined traditional conservation with an approach that recognizes the central role people play in the well-being of animals and habitat. In 1991, when a group of young people confided their own deep concerns, she invited them to co-found Roots & Shoots, a program at work with young people in 100 countries to foster the informed generation of conservation leaders our world so urgently needs.

“The least I can do is speak out for those who cannot speak for themselves.”

Today, Dr. Jane Goodall travels around the world, writing, speaking and spreading hope through action, encouraging each of us to “use the gift of our life to make the world a better place. “As a conservationist, humanitarian and crusader for the ethical treatment of animals, she is a global force for compassion and a UN Messenger of Peace. Every day, Dr. Jane Goodall exemplifies the difference one person can make. Over the years, her groundbreaking research at Gombe has attracted many women, who were nearly absent from the field of primatology when she began. Today, women lead the field of long-term primate behavioral studies around the world. She also inspires hundreds of thousands of young people to take action in their own lives and communities through the Roots & Shoots youth program. Now 100 countries strong and growing, Roots & Shoots is an unprecedented multiplying force in conservation, giving young people the knowledge and confidence to act on their beliefs and make a difference by being part of something bigger than themselves.

“Until we have peace and harmony with the environment, we will never live in a world of peace.”